Jackson had his teeth brushed for the first time today.  I have video of it but since I cannot seem to get any of my videos on the blog, you will just have to take my word.  He loved the finger brush without the tooth paste, but with the tooth paste was another story!  I got J/A/S/O/N pure, natural and organic toddler tooth paste, flavor strawberry banana (the only flavor they had), it smelled delicious, but after he didn't seem to enjoy it's taste I gave it a try.  Jackson was right, it was weird!!!  But he has some clean teeth and gums now!!! 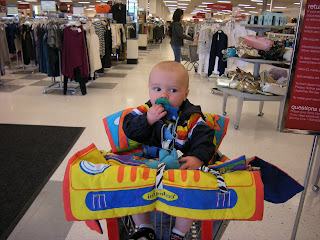 In a TJ Maxx shopping cart!!
Posted by OmomtoJ at 9:13 AM No comments:

Today is the last day to Vote!!!

Today is the last day to VOTE! Jackson is in the running for Parenting magazine's cover model.  Vote by clicking on the link.  THANKYOU!
http://photos.parents.com/category/vote/photo/281674
Posted by OmomtoJ at 4:00 PM 2 comments:

The many faces of Jackson! 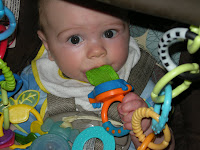 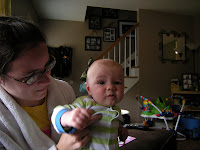 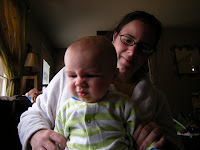 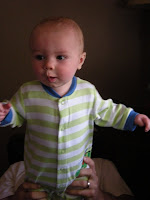 This is what Jackson looks like when he is teething hardcore...he makes the funniest faces.  The top picture is Jackson sucking on ice through his mesh teether.
Posted by OmomtoJ at 8:40 PM No comments:

I was in Paramus today and decided that I would finally visit Maternal Fetal Medicine of Valley Hospital.  I was a patient of this establishment since I was 13 weeks 6 days pregnant and I got to know all the sonographers, doctors (especially Dr. Russo and Dr. Matthew), and one fabulous genetics counselor Judith.  I have been meaning to go to that office for a while but I always seemed to be too tired, or Jackson was hungry, or I would just do it "tomorrow."  Well today was "tomorrow" FINALLY.  I found a great parking spot (which I never found when I was there for an appointment), unbuckled Jackson and grabbed my diaper bag (COACH thanks to my hubby for my birthday) and ran into the building and into the elevator.

I asked the receptionist if Judith was there and thankfully she was in the HOUSE!  When I saw Judith through the window tears filled my eyes as did hers and we embraced each other and our miracle baby Jackson.  For those of you who do not know, Judith was our genetic counselor at MFM.  Judith gave us the hard facts about omphaloceles, chromosomes, trisomy's, amnios, SUPPORT, good news, and did I say SUPPORT?!!
Judith showed Jackson off to everyone who knew us, which was  everyone in the office.  Jackson was pretty much a rockstar when he was in the womb  Omphaloceles are so rare that when I arrived for my first appointment everyone already knew who I was before I had even met anyone.  Everyone was elated to meet Jackson especially Judith and Dr. Matthews.  Judith told me that when she heard I was here she went around telling everyone that, "We have a visit!"  It was great to let everyone see the little baby they all took care of when he was in my belly.  I told Judith that I would keep her up to date, showed her his belly, and told her that I would be happy to talk to anyone who ever goes through this diagnosis too.
MFM Thank you! 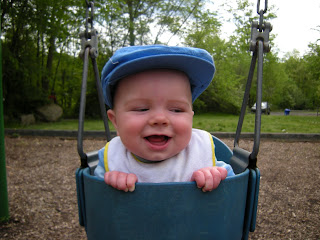 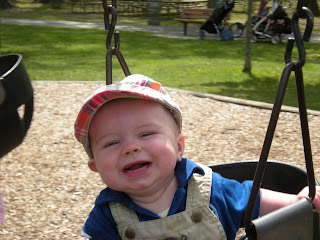 Jackson just loves to go on the swings!!
Posted by OmomtoJ at 10:29 PM 2 comments: